Perhaps because of the number of outspoken Vietnamese blogs on wordpress, it is blocked here in Vietnam, making it harder and harder for me to update efficiently.

As opposed to (or hand in hand with?) censorship, I find propaganda drawings fascinating. Here’re a few beautiful ones from North Korea: 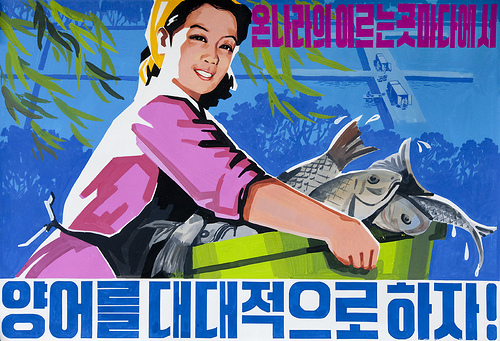 It’s interesting how avian flu enters various areas of our lives and stays to inspire different story-lines or music, which in turn contribute to the popular imagination. At a Furtureshorts screening a month or two ago here in Saigon, I was surprised to see a Belgian rooster who had survived the avian flu as the hero protagonist in a short animation. Here’s an excerpt of Tom Schroeder’s creation: 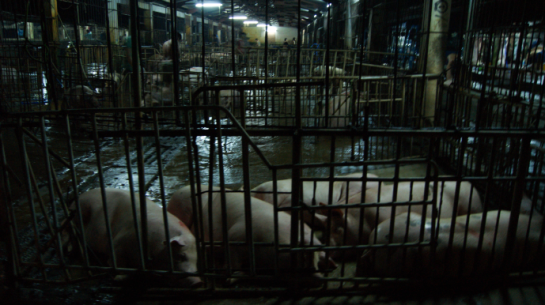 When I was a child the only times we get to eat meat was when there was some sort of festival or a big family gathering. A live chicken would be sacrificed for the occasion. My grandma would slit its throat, collect its blood in a bowl which were then used to make congealed blood. Then she doused it with hot water and plucked the feathers off. It was a process that required practice and skill and she did everything quickly and efficiently.

By the time I could cook the economy had improved immensely and we ate meat when we feel like it. Meat was also readily available in the markets and supermarkets. Occasionally someone from the countryside would bring a live chicken to the house as a present but for the most part someone else did the dirty work for us.

I never did the dirty work. I even skipped bio class in school when we had to dissect live frogs and birds. The only things I’ve ever killed were ants, occasionally spiders, and roaches (squeamishly). Otherwise, I have never killed or stayed in the presence of a killing. I’d always sneaked off.

All this goes to say being in the presence of mass killing was the first for me. It’s not that easy to visit a slaughterhouse if you’re not in the meat business, but after the district vets gave the go ahead, the virology and zoonosis team at the OUCRU took me with them on their visit to the slaughterhouse in Cao Lanh, Dong Thap, down in the Mekong.

END_OF_DOCUMENT_TOKEN_TO_BE_REPLACED

Colombian scientists have recently succeeded in training rats to sniff out land mines.

and in India there’s the Karni Mata temple that worships rats at Deshnoke, Rajasthan.

In Vietnam, we have Trần Quang Thiều, dubbed vua diệt chuột – king of exterminating rats, from BÌnh Vong village, Thường Tín province, North of Vietnam. Originally a farmer, Trần Quang Thiều invented his own mousetraps in order to kill off rats attacking his rice fields. He’d also carefully studied the behavior pattern of different rats in the area and learned where they like to hid and how they choose their routes and succeeded in placing the traps at their most vulnerable spots. Among 43 types of rats in Vietnam, 32 types succumber to his traps. In 2000 he started traveling around the area to help people, openly sharing his trapping methods and mousetrap designs. By 2006 he opened his company, exterminating rats from not just rice fields but factories, hotels, schools, big buildings, etc. They’ve killed over 10 million rats.

I read about phone apps used to identify people infected with highly infectious disease such as flu in the neighborhood last year but apparently apps produced to collect data and track the spread of diseases have been developed since 2006. These apps, according to the BBC were first developed for field workers to send data on outbreaks and drug administration to a central database, providing real time data and enabling health officials to make more informed decisions.

By 2009, with the outbreak of swine flu H1N1 there are a hoard of mobile apps for the general populace to use. There’s Outbreaks Near Me developed by HealthMap. According to USA Today it works like a GPS, displaying locations on maps with more information from news coverage or user submitted updates, and aims at “giving people real time alerts” and “not to increase fear.” Other apps include Mobile World Disaster, Swine Flu News Tracker, Influenza A Tracker, etc.

There’s FluPhone developed by Cambridge University Computer Lab which monitors the way infectious disease spread. Using bluetooth, by anonymously recording interactions between volunteers in the study the app record the number of people each “infected subject” meet during an imaginary epidemic. The data provide some insight into our network structure which is useful in the study of the spread of disease.

Here’s a screenshot of HealthMap’s data on Vietnam. Unfortunately, there’s not much information. Apps like this require a large number of users to become useful, and it seems it will be a while to go before it has any impact in the developing world.